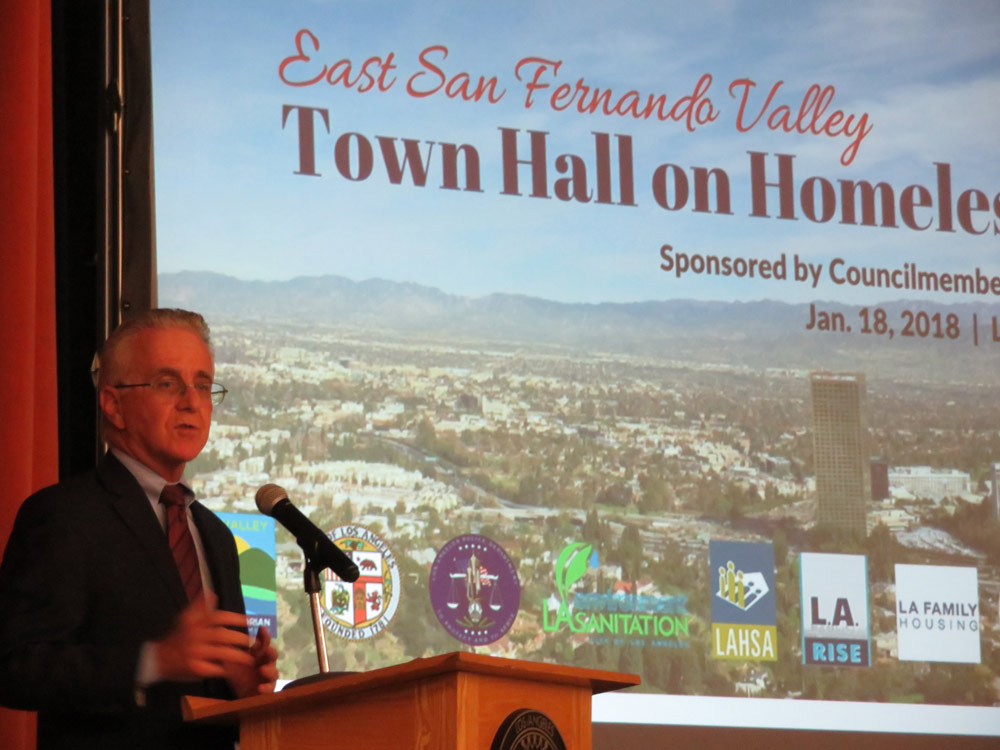 Councilmember Krekorian held a Homelessness Town Hall at Valley College on January 18, 2018 and NHNENC was pleased to support the event. The event was well attended with over 500 people RSVPing, such that an overflow room was opened.

Dr. Erika Endrijonas, President of Valley College, welcomed the crowd and spoke about homelessness among students. She shared that 20% of the community college district’s 250,000 students are homeless. Valley College has taken steps to address homelessness offering showers to students two hours a day and opening a food pantry among other initiatives.

Councilmember Krekorian spoke about the impact of housing prices in Los Angeles as well as ineffective handling of mental illness and substance abuse on homelessness. He has hosted nine Homeless Connect Days which bring together representatives across government to triage the problems of homeless attendees and get them on their way to receiving needed services.

A case in point was Moultrie Potter, the next speaker. He was one of twelve children and his mother died of breast cancer when he was eleven. He moved here as a young man in 2016 and was sleeping in a park. Fortunately, he connected with Village Family Services, which focuses on youth. They picked him up, got him a shower and food and connected him to other services which got him on his feet.

The bulk of the session was focused on presentation and a Q&A with seven speakers. Peter Lynn, Los Angeles Homeless Services Authority (LAHSA) Executive Director provided statistics on 57,000 homeless countywide, 34,000 in the City of Los Angeles. The number grew 20% from the prior year. 75% of those are unsheltered, meaning they are not in any form of housing, although they may be sleeping in vehicles. More than half say that housing costs caused their homelessness. He noted that the vast majority of people with mental illness and drug abuse problems are housed. The typical length of first time homelessness is four years. He encouraged everyone to sign up today to help with the Homeless Count on January 23 which helps direct funds to Los Angeles.

Jerry Ramirez, LA County Homeless Initiative shared how the City and County developed a plan to address homelessness in a short period of time, which was approved and funded.

Meg Barclay, Homeless Coordinator for the City of Los Angeles described the Coordinated Entry System through which homeless people of all ages can rapidly access services and be permanently housed. Further, they have identified twelve parcels of city owned land to be used for permanent supportive housing.

John Horn, Chief Impact Officer of nonprofit LA Family Housing (LAFH) explained that LA Family Housing is one of the lead agencies in the Coordinated Entry System for adults and Village Family Services is for youth in the Valley. LAFH has increased the frequency of the Homeless Connect Days to reach more people.

Dominic Choi, Los Angeles Police Department Commander said, “We cannot arrest our way out of the homeless problem.” He described HOPE teams launched in 2016 clean up homeless encampments with a team comprised of a sanitation crew, a homeless outreach team from the LA Homeless Services Authority and LAPD officers trained in this process. Their goal is to humanely clean up the community and provide services. Daily News Article on HOPE Teams.

Gita O’Neill, LA City Attorney’s Office, Director of Homelessness Policies and Strategies mentioned that the City Attorney is working to clear homeless people of legal issues preventing them from getting housing.

One of the first questions posed to the panel was about the law on homeless encampments, how to report them and why it takes so long to get them cleaned up. The process to report them is through the My311 app or call. Barriga explained that the process usually takes three weeks.

During the cleanup they impound, itemize, store or discard the property. Unfortunately, the camp may reappear the next day. The questions revealed homeowner and business frustration with ubiquitous encampments and the slow pace of addressing them. O’Neill, answering these concerns explained about how the City has lost court cases and has to balance the civil rights of the homeless with those of residents.

Some of the other challenges in addressing local encampments include determining who has jurisdiction, whether the land is city, county or other.

Vehicle dwelling was another hot topic. LAMC 8502 allows vehicle dwelling from 9pm to 6am in certain locations, not on a residential street or within one block of a park, school, daycare. Citing violators is a challenge because officers are not permitted to enter the vehicle and must have a signature on the violation. The city is actively seeking additional locations for safe parking allowing the homeless to sleep in their cars safely overnight.

Councilmember Krekorian was particularly concerned about mitigating the potential for fires from homeless encampments in high fire zones. LAFD is currently doing a survey to identify encampments, notify property owners and provide services. He encouraged people to call his office regarding these kinds of encampments.