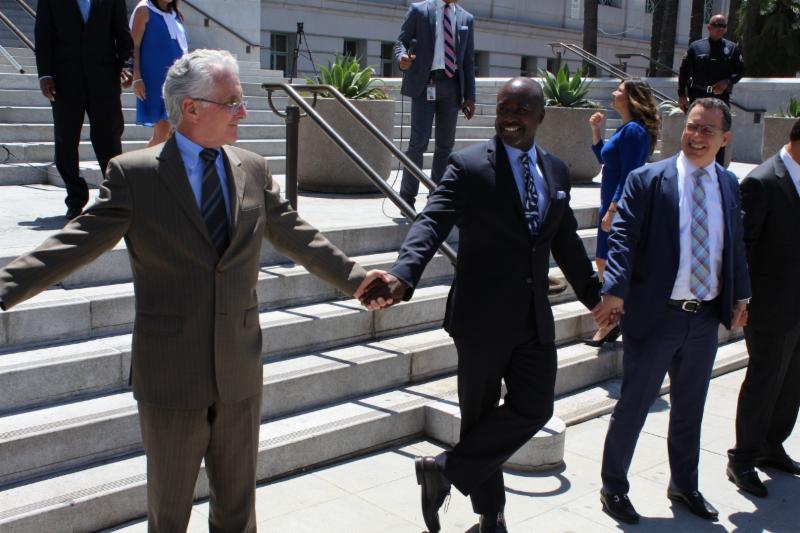 LOS ANGELES – Twenty-five years ago this week, civil unrest engulfed much of Los Angeles. Set off by a mostly white jury acquitting four LAPD officers in the beating of a black motorist, Rodney King, but rooted in long simmering economic, racial and social tensions, the six days of unrest claimed 63 lives, injured more than 2,000 and damaged many small businesses and properties. Out of the ashes, people in South Los Angeles and across the city came together to discuss and address the many problems laid bare by the unrest.

A formal commission was formed to investigate the LAPD’s response to the civil unrest. Chaired by former FBI and CIA chief William Webster, the panel probed LAPD policies, training materials and tactical plans to understand how the department allowed the rioting to spiral out of control. Councilmember Krekorian, then a private attorney, served as counsel to the Webster Commission. After extensive interviews and a broad review of policing policies in other cities, the Webster Commission concluded that the LAPD had been insufficiently prepared for civil disturbances and called for better coordination between police officials and civic leaders.

While Los Angeles hasn’t fully solved the lingering issues of racism and inequality, things have come a long way over the past quarter century. There has been systemic change throughout the city, from police department reforms to a new and more diverse city leadership that is moving Los Angeles forward.

On Friday, the City Council openly discussed the need to promote unity and understanding among LA’s communities. City staff also joined together in a grand act of unity, “Hands Across City Hall.” Organized by Council President Wesson with the participation of hundreds of city employees, including Councilmember Krekorian and his staff, people gathered outside of City Hall and joined hands in a symbolic act of unity and cross-cultural understanding. The goal was to reclaim one of the most destructive and divisive dates in our city’s history and mend the wounds with peace, unity and understanding.