Pictures and Memories from National Night Out 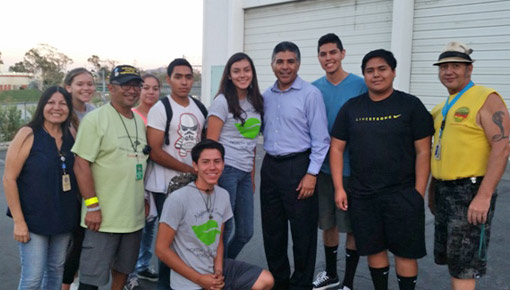 On August 4th, cities, and communities, and neighborhoods across the country celebrated National Night Out. Our own Neighborhood Council joined with our neighbors at North Hollywood West, our local Neighborhood WATCH groups and others to take part in this annual event.

Our local celebration was held at the City Department of Transportation lot at the corner of Whitsett Avenue and Saticoy Street, above the now-iconic Vintage North Hollywood mural. Both of our Neighborhood Councils had worked with the office of Councilmember Paul Krekorian to clean up this area and turn a hazard into a work of art.

National Night Out recognizes the efforts of Neighborhood WATCHes and others to do much the same. Since 1984, the National Organization of Town Watches have organized Neighborhood WATCH groups, community organizations, non-profits, and others to take back the night. It was envisioned as a gathering that would bring people out of their homes in the evening, without fear, and showing the strength of a community that stands up together. Many National Night Out events have featured marches of neighbors walking proudly down dangerous streets or cleanups of abandoned and blighted areas. Others are more festive with music, food, and entertainment encouraging people to meet each other and build trust in a community.

The National Night Out earlier this month was a gathering in the same spirit. Of course, our co-sponsor Councilmember Krekorian was there, but we were also happy to host and speak with US Representative Tony Cardenas and City Controller Ron Galperin. There was food, music, and games. Chuck Loring from our own Council MC’d the event with music and his ever-present presence, while NoHo West demonstrated mastery of the grill and cooking.

By the end of the night, everyone had eaten their fill, caught up with their neighbors and maybe caught the ear of some of our elected’s, and praised the progress we’ve made in making our area a little bit better. A few pictures from the night on Flickr can be found from our photo page under the Archives tab.

And for everyone who couldn’t make it, we’ll see you next year.