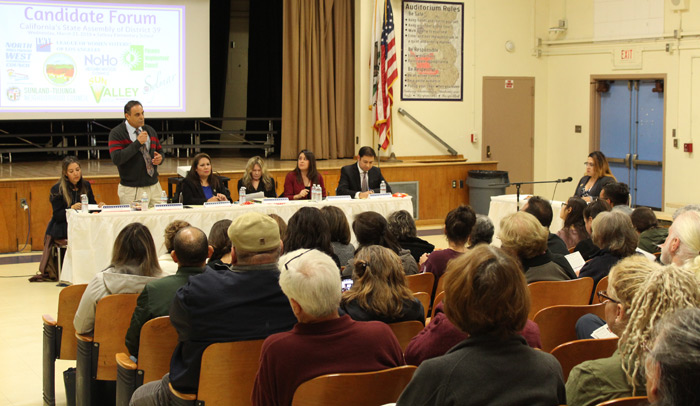 Thank you to all who came out to our 2018 Candidate Forum for the 39th Assembly District and to the participating Neighborhood Councils who supported the event.

Saticoy Elementary Auditorium was full March 21 with voters interested in hearing from the candidates. Marilú Guevara, the Executive Director of the League of Women Voters of Los Angeles did a great job of moderating the forum and keeping the candidate comments within the time allocated. She presented prepared questions collected from the community in advance and distilled to focus on key topics. Each candidate had an opportunity to answer each question, with a different candidate starting each time.

The questions allowed candidates to share their position on: 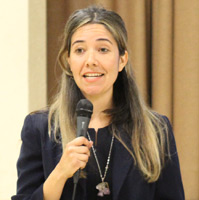 Yolie, is a proven leader in the community. Born in Panorama City, grew up in Mission Hills, and now live in San Fernando. She has a deep commitment to our neighborhoods. She holds a B.A. in Sociology & Psychology from California State University Northridge and a Masters in Public Administration from the University of Southern California.

Community Service. She has served the communities in State Assembly In Pacoima, developed and managed a job-training program at M.E.N.D. In Mission Hills, she was part of the Neighborhood Council where she volunteered to create green space to enhance the well being of all. In the City of San Fernando, she helped the local Community Health Center qualify for federal funding. In Sylmar, she helped approve the zoning for new businesses while serving on the LA City North Valley Area Planning Commission. Public Service. She worked with Homeboy Industries, forming partnerships to expand erecycling and create job opportunities. Worked with MEND, providing job counseling and job connections for local residents and local employers. Worked with California Food Policy Advocates to improve health and nutrition in our schools, child care and neighborhoods. Volunteer Service. She continues to manage & maintain beautification community service projects at the Nature Parkway. Served on the boards of Comision Femenil and Pacifica KPFK 90.7fm Her entire life has been about giving back. She looks forward to working together to put us first. Remember, you have the right to ask what my opponents have done for you. 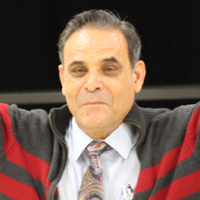 Ricardo Benitez is a small business owner and advocates for upward mobility and grassroots causes. He ran for California Senate and won the primary in June 2012.

He has been a longtime activist for non-partisan politics and independent candidates, as a Republican, determined to restore Republican principles and processes to the Republican Party and to our State. He is the only major candidate that publicly denounces and actively fights to defeat the High-Speed Rail, [H S R]. The only candidate that strongly Support Sound walls on 210 freeway, and the only grassroots independent Republican running to reform the Republican Party in California. He has been a California Contractor license and Business Owner in Los Angeles since 1989. He also worked in the tech sector as an Educator. As a businessperson, he is a champion of free enterprise. But he will stand up to corporations who use the influence of money to gain one unfair advantage after another at the expense of the Californian people. We all want a government we can trust, where laws are fairly and equally applied. He will make it a priority to overturn Citizens United and institute meaningful campaign finance reform. He is concerned that California is losing our values, moral and principal compass. He is the candidate who will stand up for those Values. Ricardo humbly asks for your vote to serve as your Assemblymen Sacramento, California. With your voice and your vote, We the People will take back control. We want Our California back! 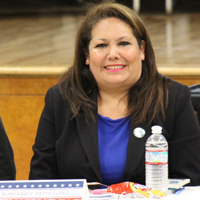 As your former Assembly Member I served our community from 2014-16 in the Assembly, passed 11 bills into law, aided over 200 individuals with housing services, and worked to open a new satellite college campus. I am ready to go back to work for you and represent you while working on the priorities that community members have shared with me, such as
1) Improving Wages and Economic Opportunity,
2) Expanding Access to Education,
3) Solving the Affordable Housing Crisis and 4) Access to affordable Healthcare.

I will continue to be the voice and advocate for all our hardworking families, and NOT the voice of special interest groups. I will NOT ignore you like many local past career politicians that are controlled by their political networks. I have lived in this district since 1980. I am a proud American Citizen, former Assembly Member, community activist, mother, and grandmother and I would be honored to have your vote. 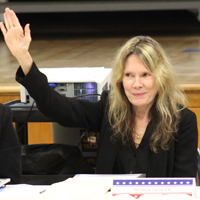 I am passionate and concerned with the non-Transparent agendas infecting us at the State level. I was graduated from Cal State Northridge. I’ve spent years in documentary journalism. My films explore the environment, politics, the Federal Reserve, banking schemes, the security and vulnerability of the power grid that the utilities have hidden from the public. It has given me dedication to protect us, the little guy. I have exposed pollution of our water, toxins in our Agribusiness, GMOs and Patents on our food crops. I didn’t wait for more stalling. I did tests on The Rocketdyne Nuclear disaster that revealed a 20 mile radius spread of radiation contamination in the valley! I marched for the cleanup of the Aliso Canyon GAS disaster. I will focus on protecting the National Forest from the High Speed Rails environmental degradation and Economic consequences of up keep. I care that Education in our district is falling behind state level. We have homeless, veterans, seniors, housing, healthcare, infrastructure, transportation, and our local water security to address immediately. My life has been dedicated to the betterment of our state, our Environment, and our citizens. 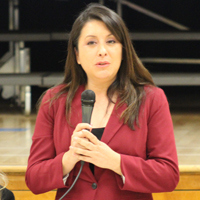 Luz was raised in the San Fernando Valley by a single mother. As a 5th grader at Telfair Elementary School in Pacoima, Luz became interested in technology and engineering when her teacher taught her class how to program a computer.

At Pacoima Middle School, she continued learning about computer science, and at San Fernando High School, she enrolled in a state program that helped students excel in math and science and go on to college in these fields.

Most recently, Luz served as a City of Los Angeles Public Works Commissioner, where she was the liaison to the Bureau of Street Lighting and she continued her gender equity work. Luz Rivas has dedicated her professional career fighting to ensure that every Californian has the opportunity to learn, prosper, and succeed. 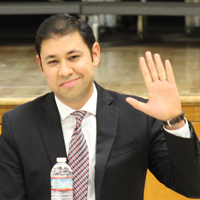 I grew up in the San Fernando Valley and now I’m raising my own family here. As a workforce development director, I’m helping local veterans and students in our neighborhoods get the training they need for good-paying jobs that are growing our middle class.

I’m running for State Assembly to put my Valley roots and experience to work for our community and create more opportunities for all people to succeed in today’s economy. I’m the only candidate in this race endorsed by our local teachers, nurses, firefighters, and Democratic clubs. 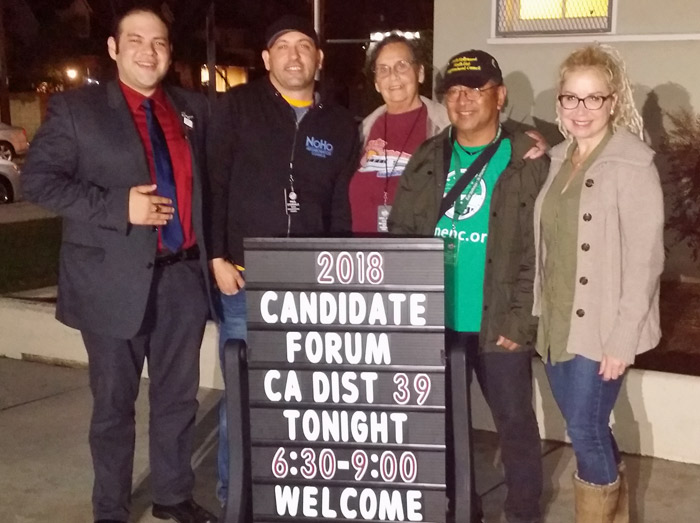 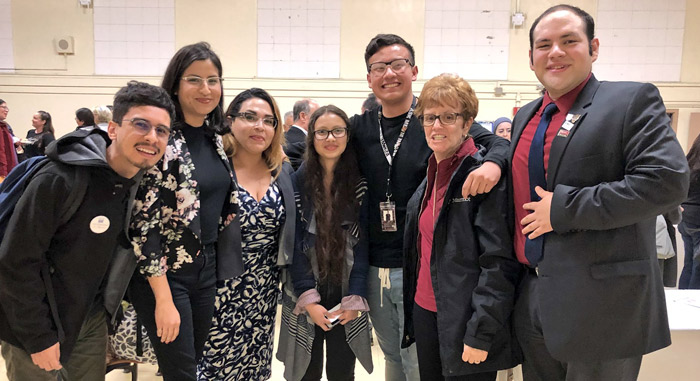 Moderator Marilú Guevara from the League of Women Voters of Los Angeles, along with their staff and volunteers. Ashley is the IgniteLA student part of EmpowerLA with her friend Andrew. 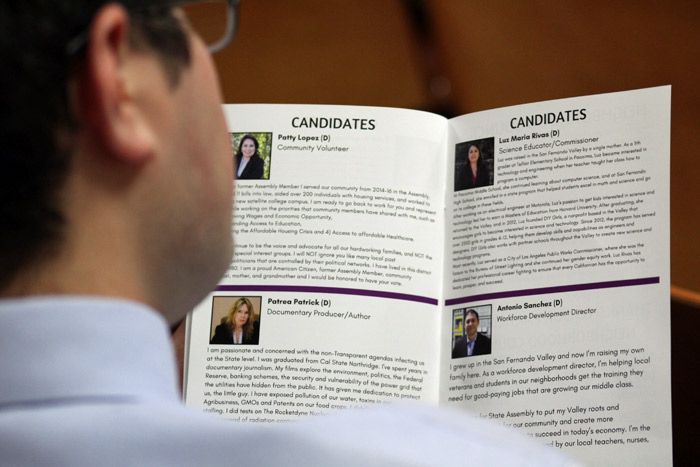